I keep hearing that patience is key to maintaining a natural pool. And to establishing your natural pool. But we ran out of patience.

This is an update to the original piece, Natural Swimming Pools – step by step how to build guide. It’s now been almost 20 months since the project began in Mexico – just south of Mexico City – and there are detailed photos in the original story that show the construction and initial stages. If you recall, we began filling it, had a few problems, added plants, had a few more problems and thought we were almost there. 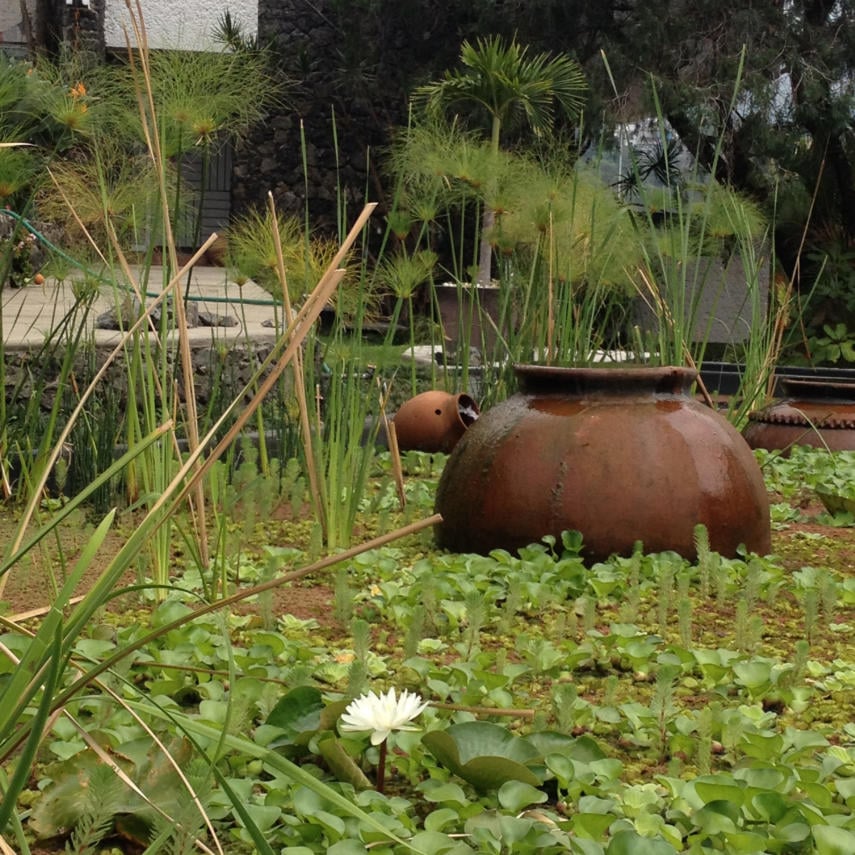 Floating plants in the natural pool

The floating plants, the water hyacinths in particular, multiplied exponentially. And they eat up a lot of oxygen and set the stage for string algae, Which we got, big time. By this time, I’m done with the contractor’s advice and doing my own research on the internet for natural pool problems. High PH and low oxygen are the two big causes of string algae. Our PH registered above 8, which if you listen to some is only slightly high. We used organic white vinegar to bring it down to 6-something. And we pulled out a lot of hyacinth. They make wonderful garden compost but they are nasty to swim in. 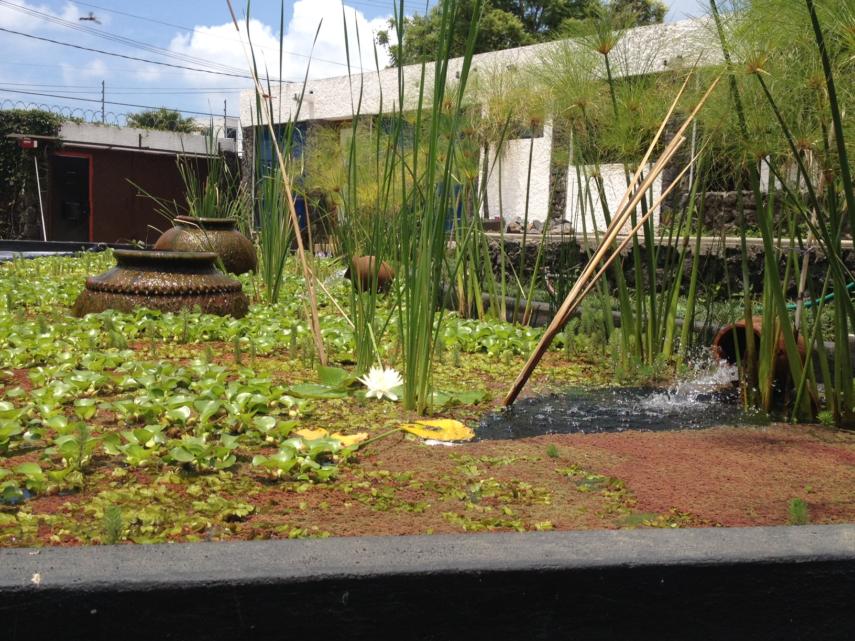 But then we needed more plants. So we got more water lilies – in Mexico called “Nenúfares” (Ne-new-fa-rez). In the meantime, the lower PH seemed to kill off the string algae but then we had dead algae, which turned into brown murky stuff on the bottom. Yuk. Not swimming in that, unless I endeavor to never touch bottom. It’s 6′ deep for the most part, but still. It was supposed to be a natural pool. I sometimes felt like what we got is a 40-ft long fish pond. 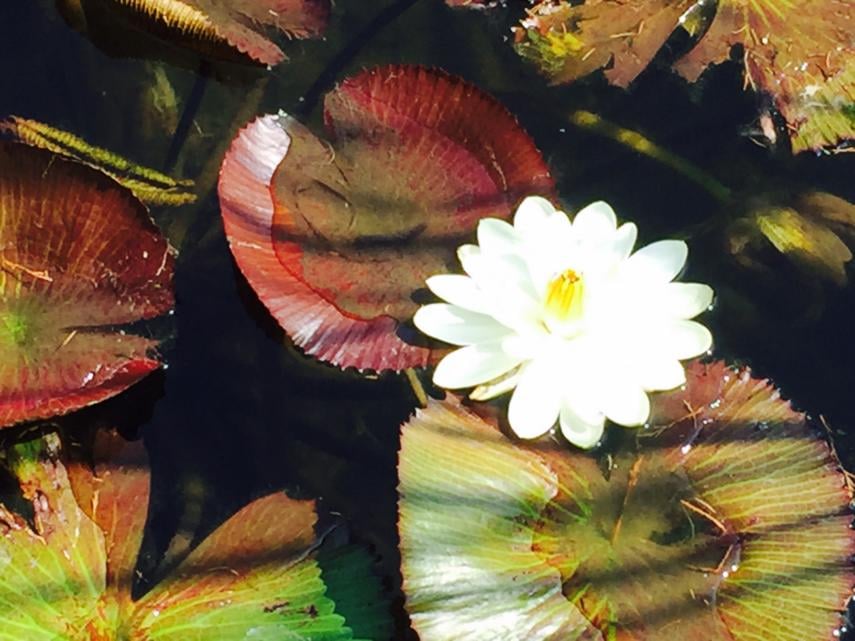 Bacteria is your friend in a natural pool

In any event, I got some beneficial bacteria and put that in. It comes in a biodegradable small pillow shaped sack that you throw in the water. It even has a little barley straw, which is also an algae combatant. All organic, won’t hurt plants or fish. The contractor supposedly added some at the beginning but to be honest, I don’t know if he really did or not. It breaks up the sludge/slime/brown stuff, whereby it circulates and ends up going through the charcoal filters, those two very large terra cotta urns or pots (called “macetas” in Mexico).

And at the same time that the bottom of the pool is gross, our water is crystal clear – it really is like the cleanest of lakes. But we had to get rid of the dead stuff on the bottom. The contractor kept telling us it would happen, but when? Really, should it take over a year for a natural pool to establish itself? (And if so, why did you tell us three months?)

So, then we had a lot of the dead stuff on the bottom. We hired someone to vacuum it out and by the time that was done, the long string green algae came back. And then we had more very vibrant lime green algae on the bottom. The water however, is still crystal clear at this point. But there is lots of green slime in it that looks like neon  waste material. I ordered something called Nu-Algae also. Expensive, but it did seem to help somewhat. But we had a really severe case and we couldn’t get over that hump. The algae won.

Slime is not your friend

We turned the solar heat on, only to discover it made even more green slime in the water. The pump was too small. The cement box for the pump was too small. And while we’re here, the pipes are too narrow. You’ll never heat this pool like that. There aren’t enough solar tubes. Plus, they aren’t strong enough for a pool this size. To boot, the pool is getting greener by the day. And not green by being choked by floating plants. Green by being choked with slime. Even the solar heater, lame as it is, stopped because the pump filter gots too clogged. With green stuff. 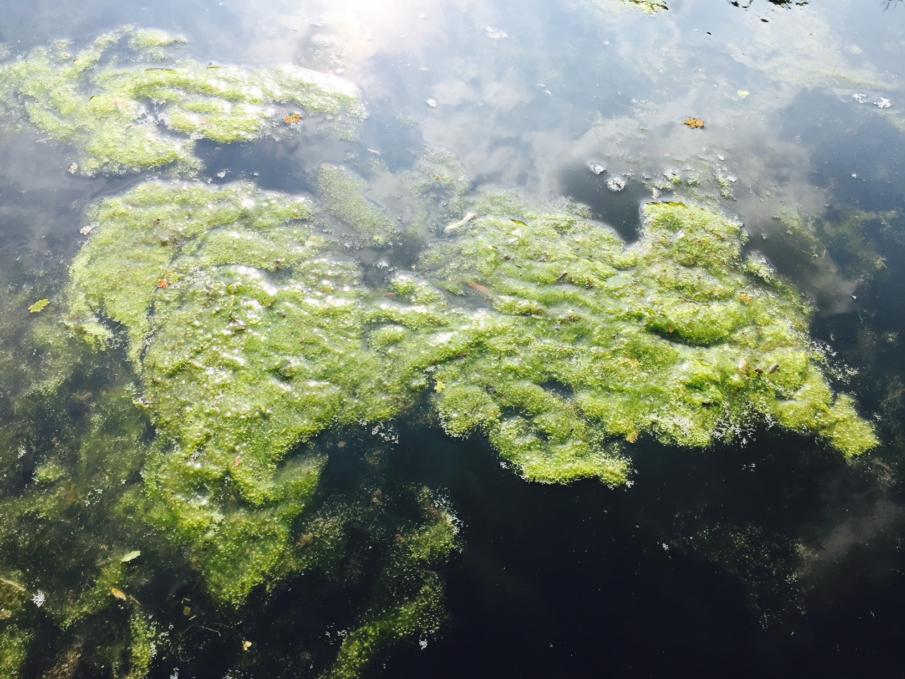 Would you swim in that? Seriously.

So, the contractor said, “You must have the floating plants back”.

We said,”It was a carpet across the water, you can’t swim in that, plus they ate all the oxygen”.

He said, “That is how we designed it, for floating plants”.

We said, “Your original concept and every photograph/sample you showed us of a natural pool had *no* floating plants, not one. And no string algae, either”.

At this point, we didn’t even mention that the original plan was for the water to leave the pool, cool down, go get cleaned by the plants, then run through the solar system and brought back to the pool. And he managed to scuttle that extra stage before we could object. We didn’t even mention it. That took great restraint.

Then, he actually said, “You need a UV filter”.

It started to get clearer to us. Not the pond, but our situation. So, we said, “No, google it. UV filters do not combat string algae, only green-water algae. Our water is clear, which you would know if you ever came out to look.”

It started to dawn on us that we actually knew more than he did. And as you can imagine, it went downhill from there.

Think of what we ended up with. Then look at the photos in this story – Choose a Natural Swimming Pool or Pond – the photo below is the look we wanted (more or less). Our natural swimming pool didn’t look much like this: 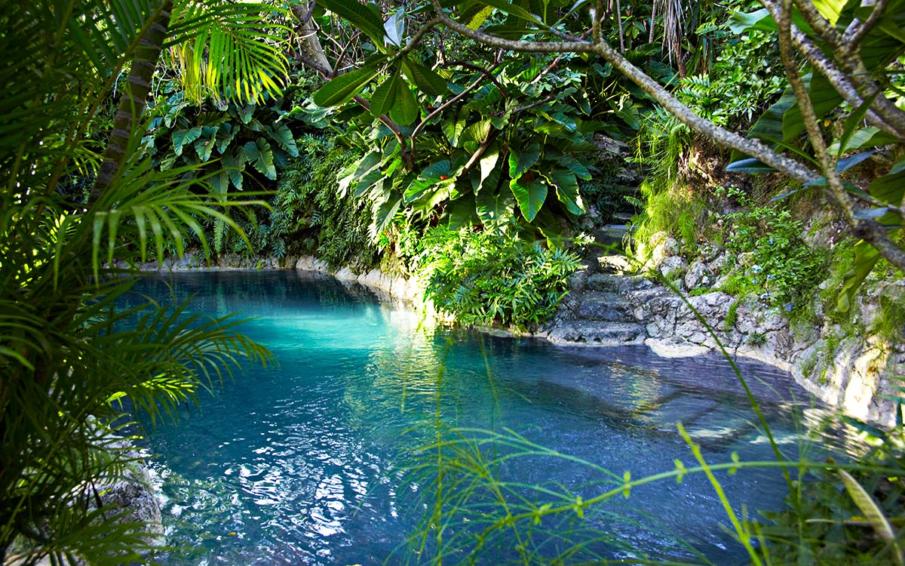 His filters were inexpensive charcoal filters and other materials like sand and large rock (tezontle, volcanic rock), inside the big terra cotta pots (which we supplied from our garden). The original plan looked nothing like this, the pond and pool were to be separated by a wall, and fed into each other. There was *supposed* to be a spillover return at the end of the swimming channel. There’s not. There was even going to be a waterfall down the house roof, connected to the pool. Boy, did we get taken down the garden path (so to speak).

We chose a really bad contractor, who conned us all the way. We  have considered going after him to get our money back but in the meantime, that will take years.  But in any event, we had to decide what to do with our 40-ft fish pond. 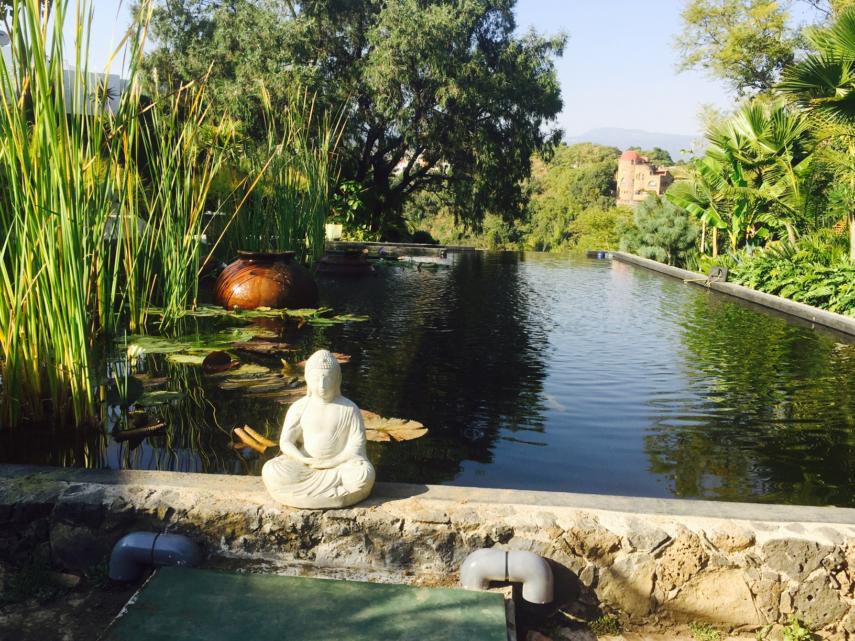 At times, it was beautiful, as you can see above. Just not swimmable. The algae had settled into a green blanket on the bottom and the water was cold. What would it cost us to turn this into a pool we could swim in? That was the question.

It had been, by this point, close to 17 months since we had been told we would be swimming in three months. The yard had already been full of workers for months at a time. Were we willing to go through it again? The alternative was that our natural pool would never be more than a 40-foot fish pond. That was the only thing that was clear. 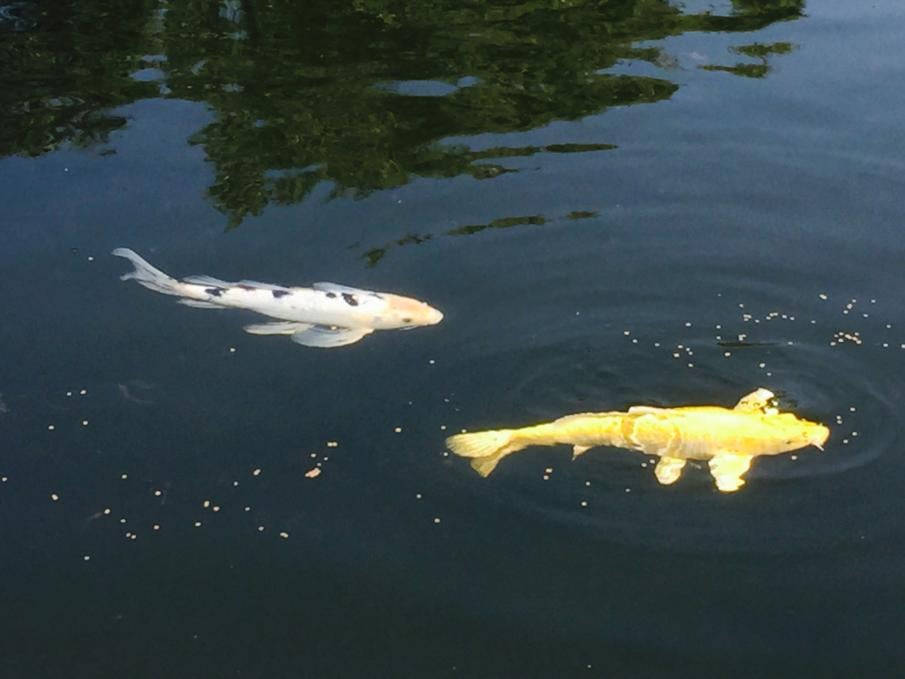 And so it begins, again

We gave our fish to our neighbor for his pond, so that we could drain our pool and pond and start again.  They were a bitch to catch. He named the fish after Mexican presidents by the way. Porfirio and Benito (Juarez) who disliked each other intently. 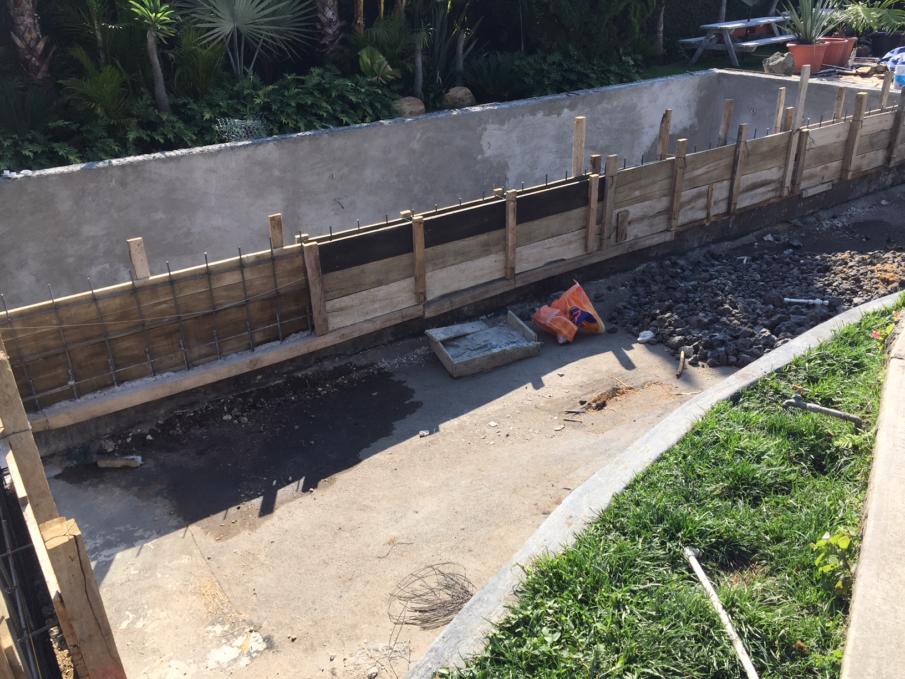 So, they drained the water and rebuilt the sides of the pool. The walls were up to 4″ out of whack from top to bottom in the original construction. I kid you not. We also built up the pony wall to separate the pool from the pond. And provide a walkway for maintaining the water garden. Now it was our design, not his. 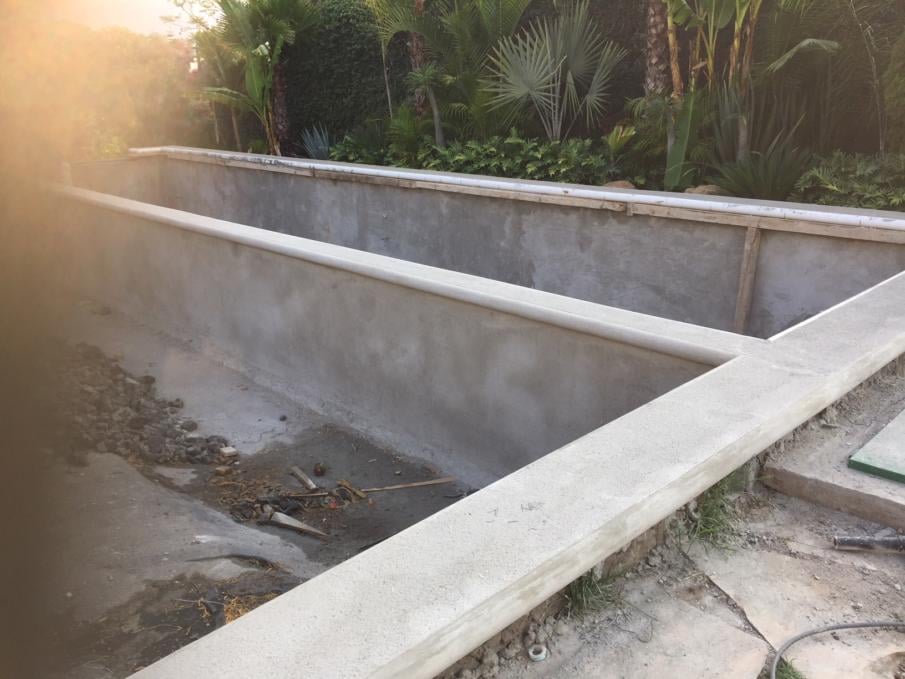 We used the contractor who had previously done all our house renovations and it worked out well. They did a very nice job and good work. From start to finish was slightly less than three months. The next step, once the concrete was straight, was to tile the pool. That only took about a week.

And finally, came the day we could start to fill it… 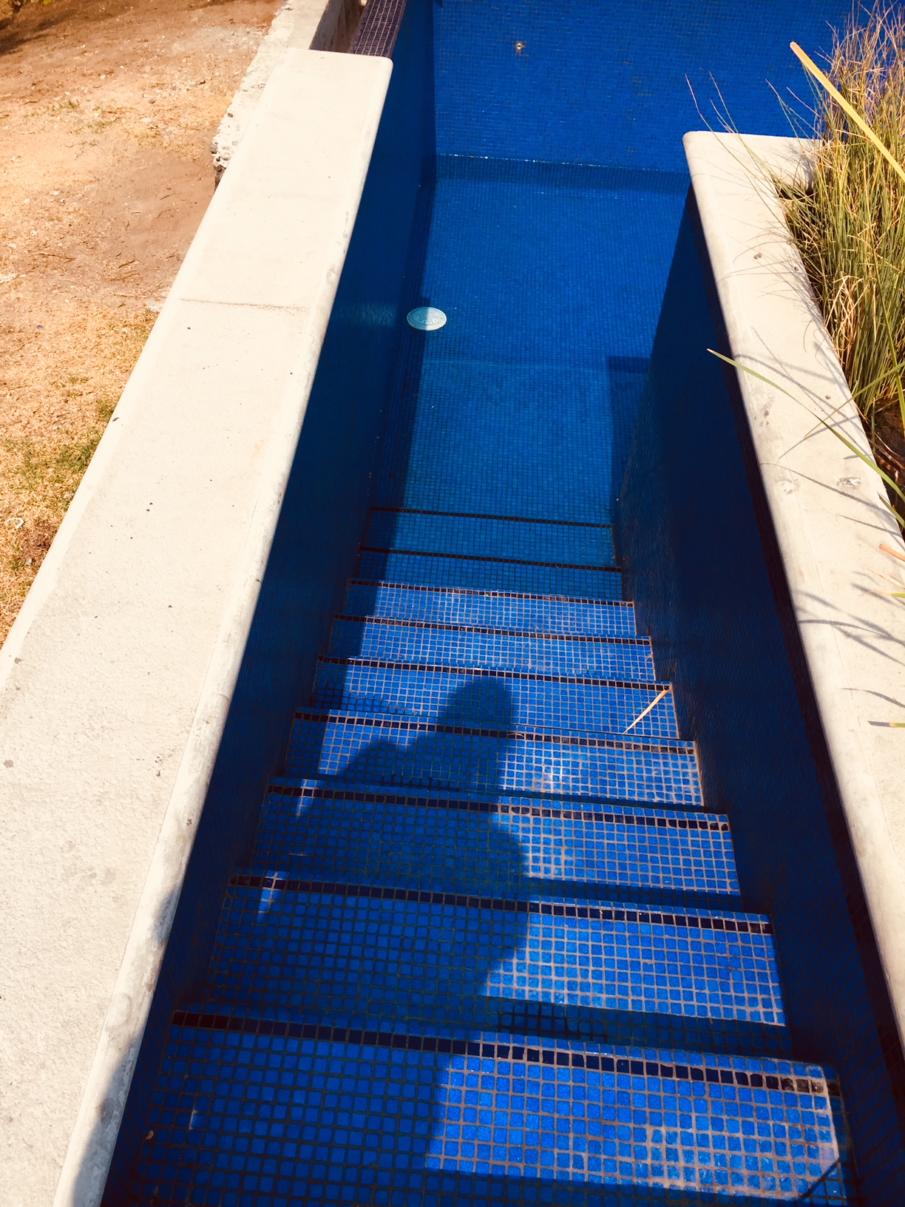 Then we needed to replace most of the grass around the pool, as well. They had to build a pool room into the tropical garden, half-submerged. It looks okay now and it will grow in further. We’ll get some more plants for the top. 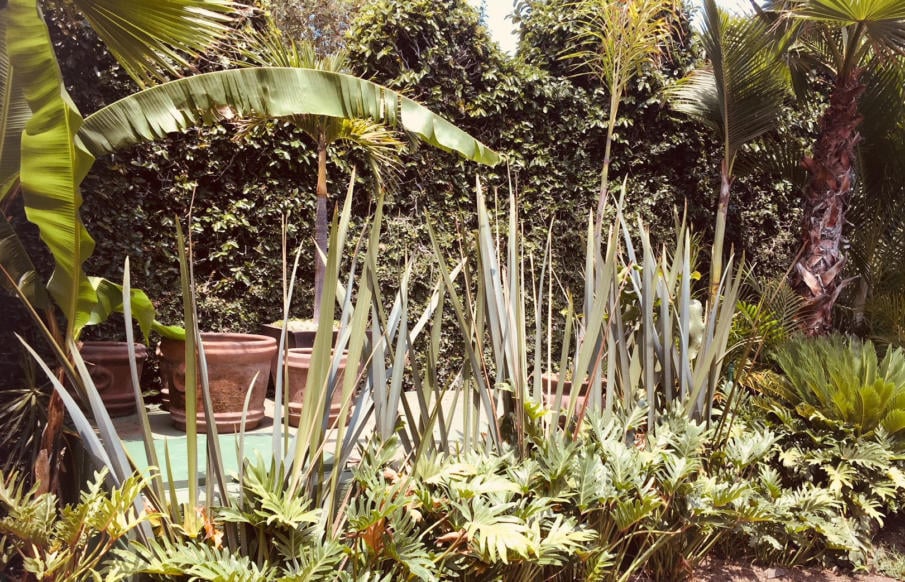 It’s on the right-hand side (below) almost at the end of the pool – you really don’t notice it. 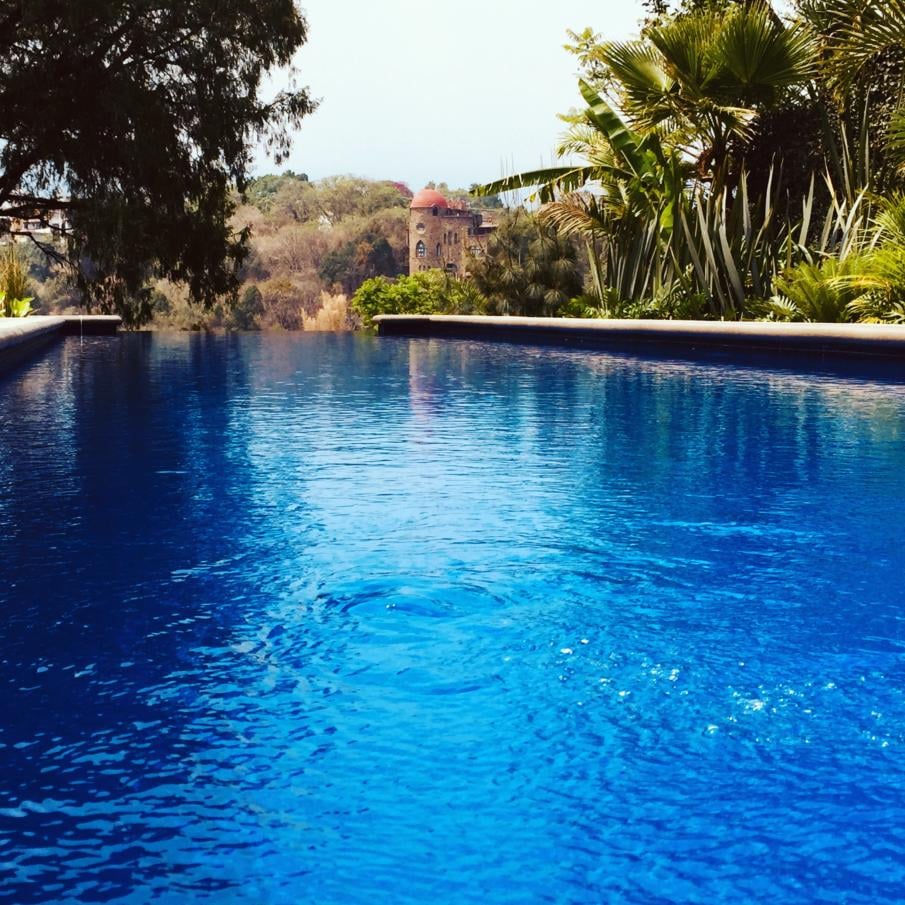 And that’s a wrap

And we love it. We found a great pond side guy, who might have been able to make the natural pool work given time, but we didn’t want to beat what we felt was a dead horse. Now, the filtration system on the pond is set up totally differently. We kept one of the macetas but it is the regeneration zone at the end, with the Buddha that cleans the water. The pool side is a solar ionizer. 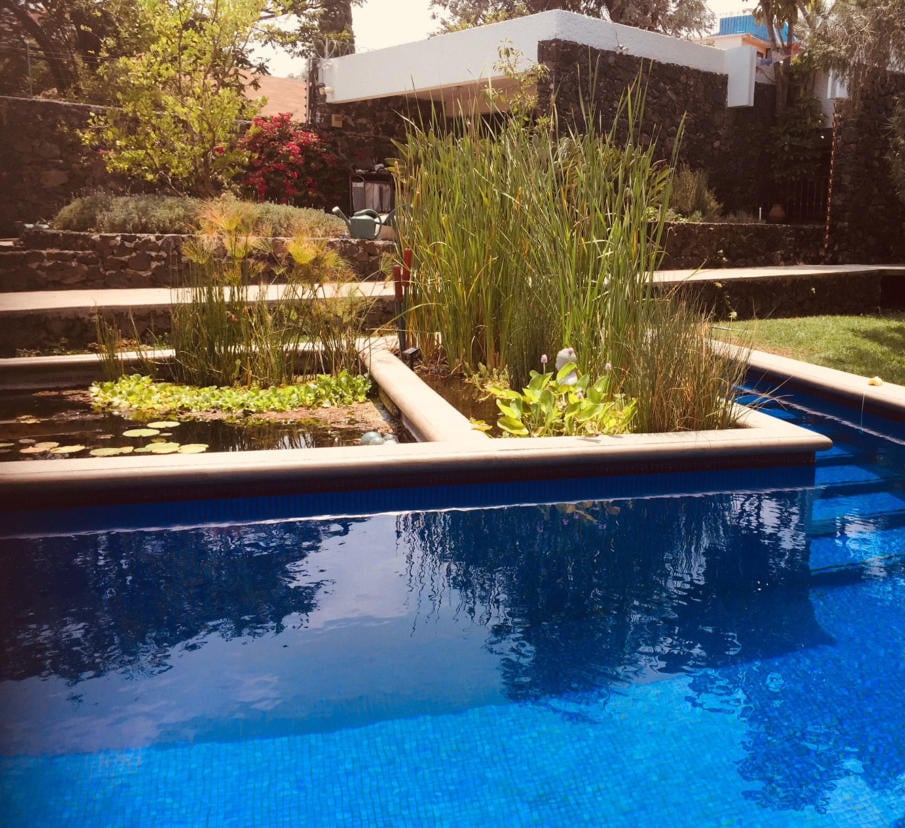 The water garden is divided in two – we love the darker blue tiles in the pool portion. 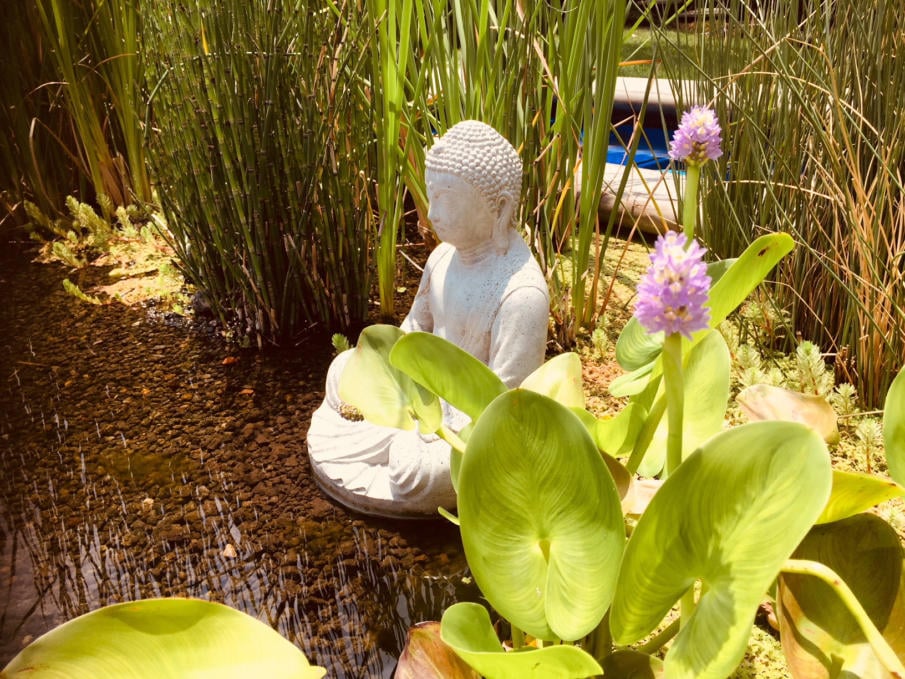 The heat is solar and the pool temperature reaches 32C (92F) most days. The beautiful blue cenote color is a result of the tile choice.

We redid the patio in an acid-washed cement while we were there. In for a dime, in for a dollar I always say. 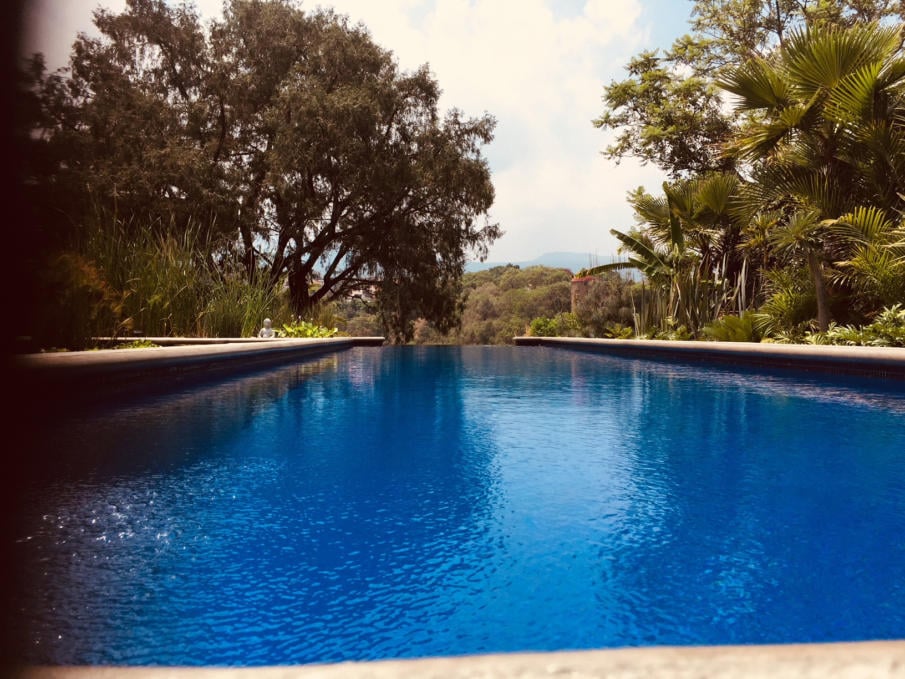 I swim every day, down the steps into the water and swimming. Just like I imagined it almost 20 months ago. Only swimming with dragonflies and butterflies beside me, which I hadn’t anticipated. They say all good things come to those who wait, right?

About Joe Hats 139 Articles
Joe Hats is the founder of FreshPatio.com. Joe has been remodeling homes since 1997 when he bought his first fixer-upper. He has built many pieces of indoor and outdoor furniture with his own hands and has every DIY woodworking tool in his possession. Coming from an engineering background, he has designed and built many patio fixture plans. Following his wife's lead, he is also very passionate about home decor and together they keep track of the latest trends. When he is not remodeling or trying a new woodworking tool, he is busy gardening or designing a new outdoor plan.