Building a cinder block fire pit is a quick and easy DIY project. Just look at the images below and judge by yourself how simple it is to build one. Called Cinder Blocks or Concrete Blocks, you may have them laying around your backyard. Or you could get them on craigslist, possibly for free. Let me show you some ideas and plans for building such a fire pit on a budget. The cheapest plan would use blocks only. If you’re willing to spend a little more money you could decorate or enhance the look of your pit with other types of outdoor stones or pavers. Which in my view is totally unnecessary, but I digress. 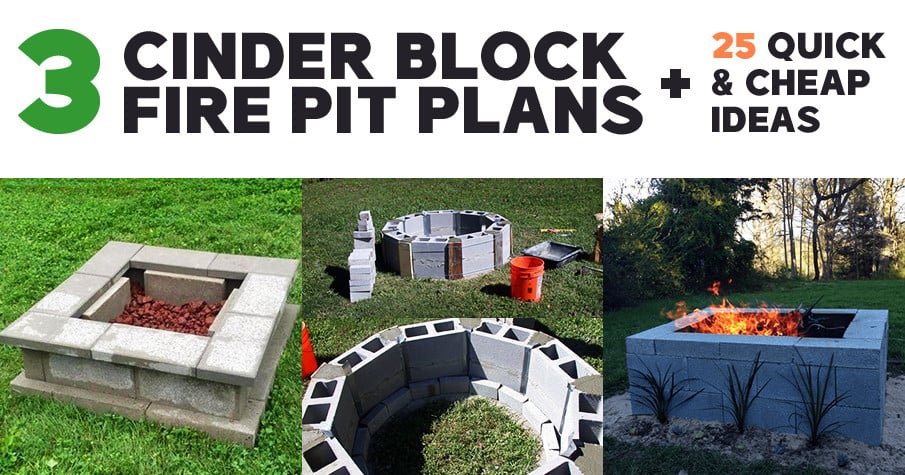 Note: despite the obvious pros, there are some cons you need to know about before building your Cinder Blocks pit.

There are a few shapes and sizes to choose from (see image above). Those with holes have through holes – they are hollow all the way through. The rest are solid blocks. The skinny ones with no holes (16″ x 8″ x 2″) are called Caps.

The 8-in x 8-in x 16-in Standard Cored Concrete Block from Lowe’s is a very popular choice. It’s priced at $1.35, two cents cheaper than at the Home Depot.

The Cinder Blocks are fire resistant meaning they won’t burn, but they are not fire rated, and prolonged and repeated exposure to fire will make them crumble.

TIP: As I did some reading on that site, I now understand the reason why people fill holes in Cinder Blocks with gravel or crushed rocks – it improves the fire rating of the blocks. So that’s a good tip!

If you read reviews, the general opinion tilts towards not using them in fire pits, as they are not fire-rated (see home depot reviews). Some even suggest placing a steel fire bowl or a fire pit ring on top, to protect the structural integrity of your pit. Others would line the pit with firebricks. But that would make your DIY plan much more expensive.

But hey, you’re making a very inexpensive firepit, often from free or recycled blocks. The expectations should be low. 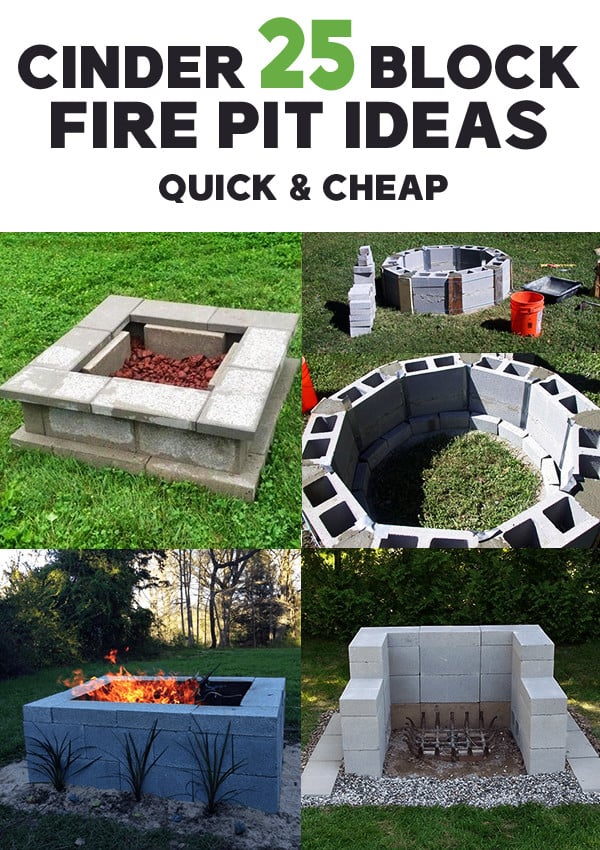 Will they Crack or Explode?

So naturally, I wanted to find answers to these questions. Can I use Cinder Blocks to make a fire pit? Is it safe? How do Cinder Blocks hold up to fire? As economically this would probably be the cheapest way to go.

In my research, I’ve only found two accounts when people saw them explode, sort of. In one case, they heard a loud pop but there was practically no debris, and in another, there was some very minor debris. Yet, there were many who said they had them crack.

Here are some of the best answers:

Verdict: use some caution, try not to lean burning wood against the blocks. Make a larger size pit, but make the fire smaller.

How to Secure Cinder Blocks Together

TIP: don’t do it – will be easier to replace those cracked.

But if you decide to glue them anyway then it’s another few dollars extra for either:

For a mortar, I would use either of the two shown below.

Do you have to glue the blocks? You don’t have to – they are heavy enough to stay in place, providing no one will try to purposely push them apart. But if you have small kids it would be safer to glue them together.

I found these two adhesives that based on my research would be the most suitable for connecting Cinder blocks when building a firepit: Liquid Nails FuzeIt and Quikrete Fireplace Repair Mortar. A good question to ask in the store would be which one holds better near the fire. 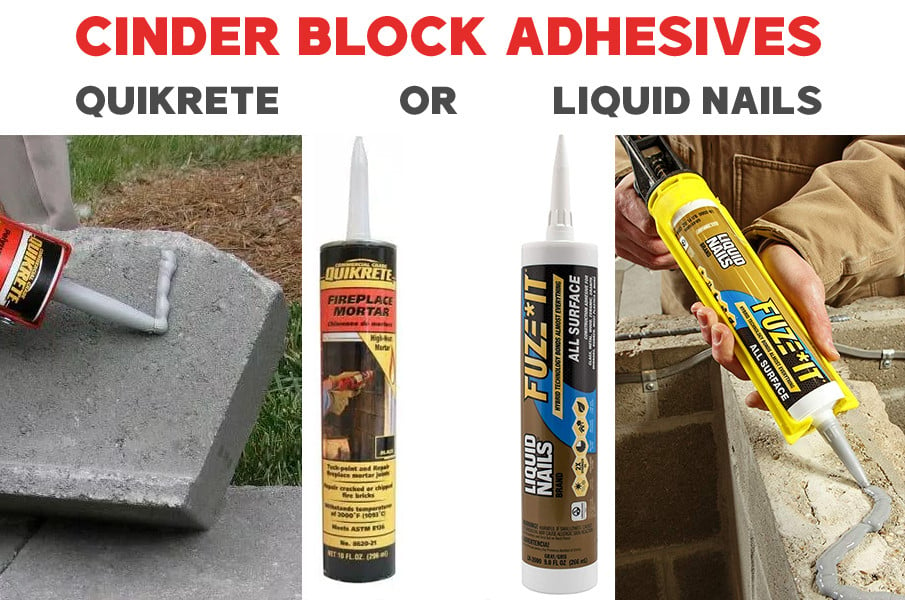 1. Under $60 Plan that You Can Simplify Even Further 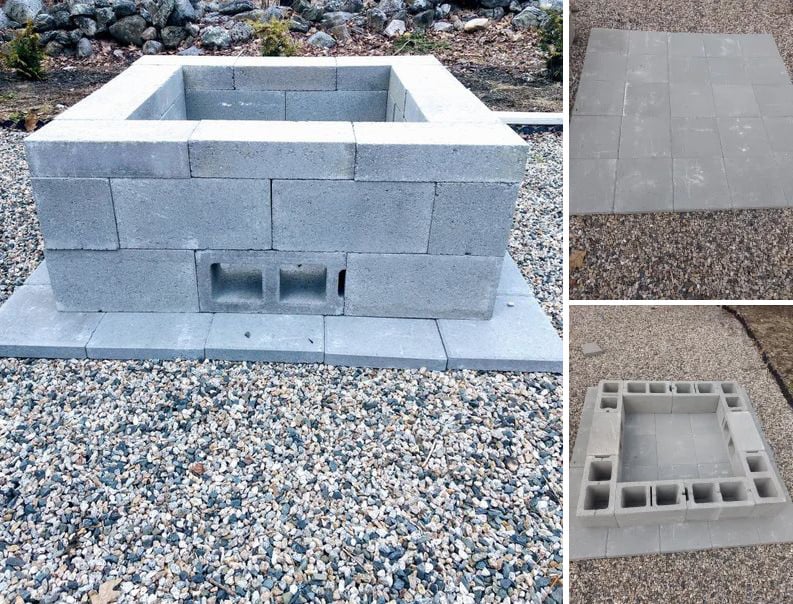 This is a quick and simple fire pit plan made from cinder blocks and finished with concrete caps on top. We’ve found 4 DIY projects done using this tutorial, with similar designs (see image below). In some, different materials and colors were used for the ground layer. And other are designed to simplify this idea even more – they are built straight on the ground. Some designs have pavers placed on top and some don’t. Build it. 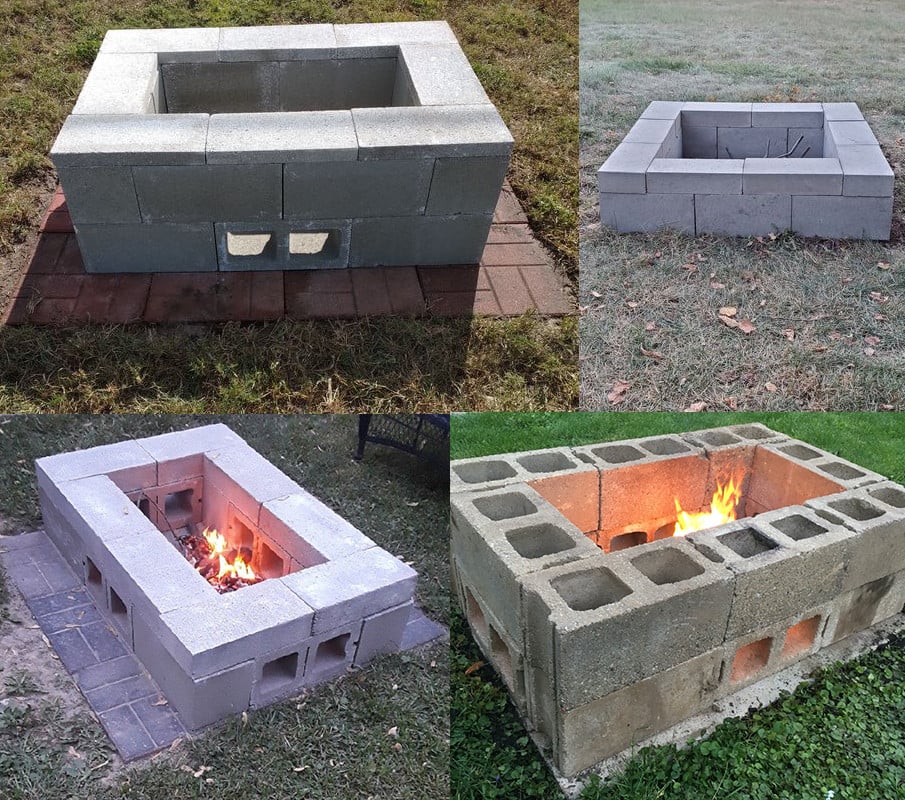 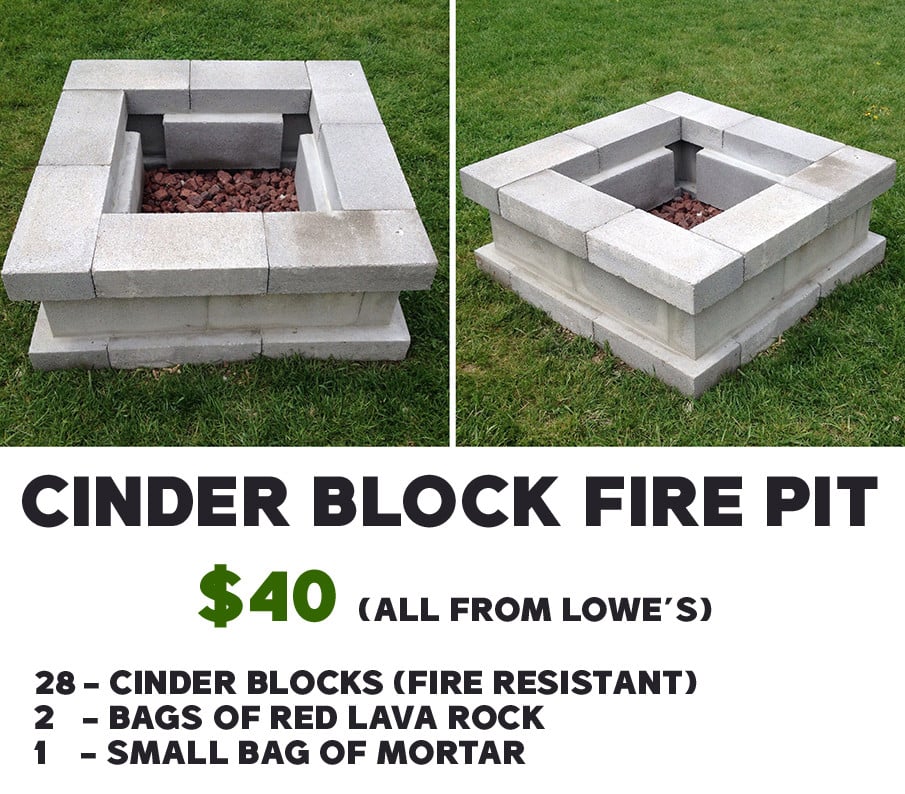 The original design plus some guidance can be found here. Note: the image there says they used 24 blocks, but I believe it’s a mistake. A total of 28 blocks is needed here: 8 for the base, 8 for the top, 8 for the outside frame, and 4 for the inside supports (one on each side). And the notes confirm that.

The DIY designer says all supplies were purchased from Lowe’s and it took about 3 hours to complete.

It’s a nice square pit. They used fire-resistant concrete Caps (shown below) that can be found here. See more detailed instructions here on how it can be built.

Shown below is what other people made using the above instructions and photos. And some claiming to spend even less than $40. As many DIY-ers as many ideas. 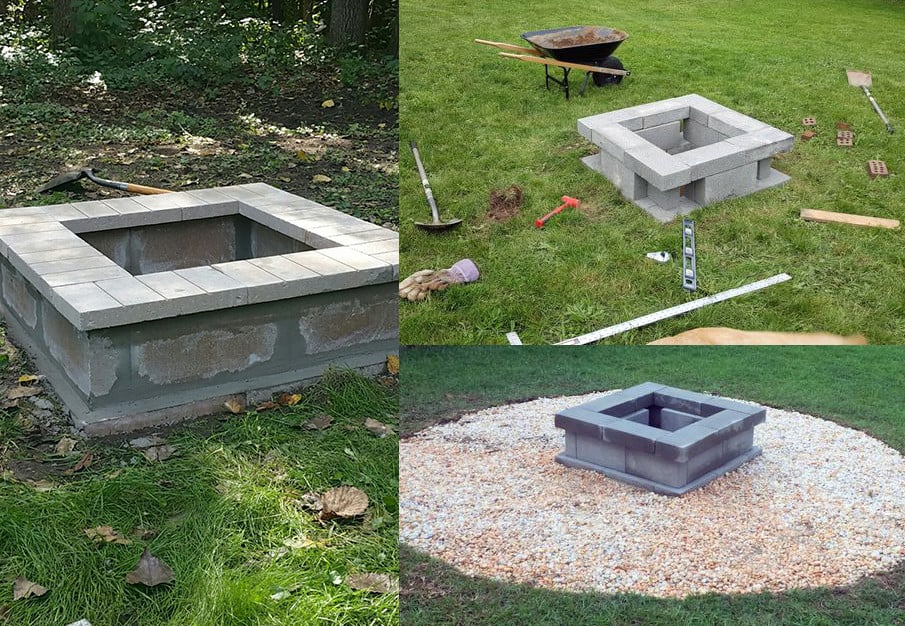 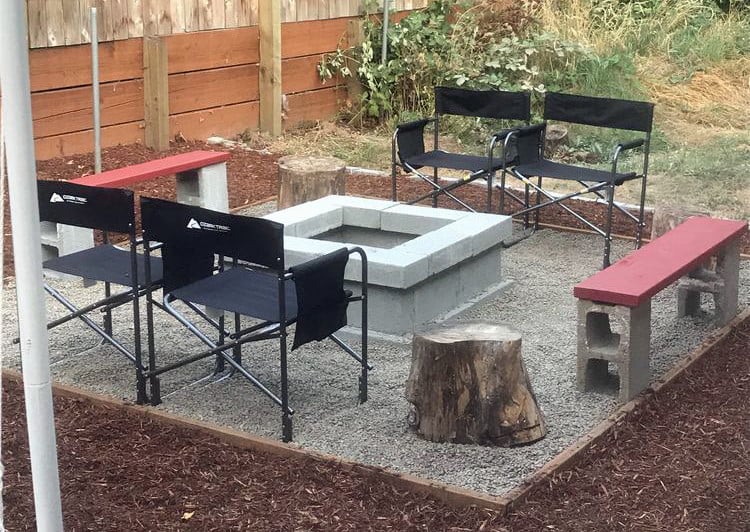 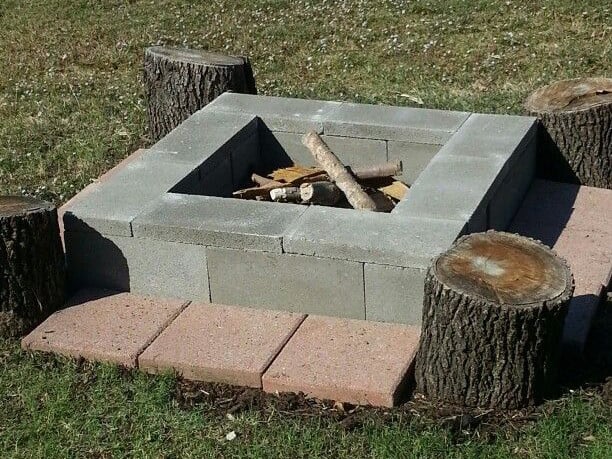 As per the designer, shown above fire pit plan requires 8 cinder blocks ($1.45 each), 8 cement caps ($.95 each), 2 bags of lava rock ($2.75 each) and optional 1-foot square pavers ($3-ish) to complete. You won’t have to do much. This is one of the quickest and cheapest plans we’ve seen. You would level the ground, set the blocks, place caps on top (to cover the holes), drop lava rocks in the pit, add a few pavers, and done.

Many DIY-ers appear to believe that filling up Cinder blocks with gravel helps to keep them in place and makes the entire construction more sturdy. And I agree, good idea on a budget, to strengthen your fire pit design. Plus, it helps to keep less water in. 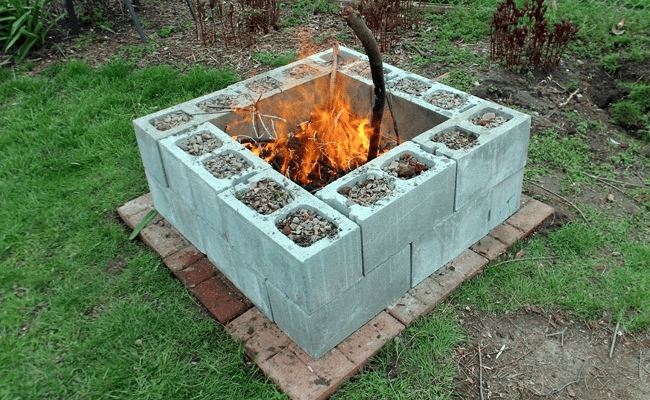 Below are a few more DIY ideas and plans that other folks built from cinder blocks and paver bricks. 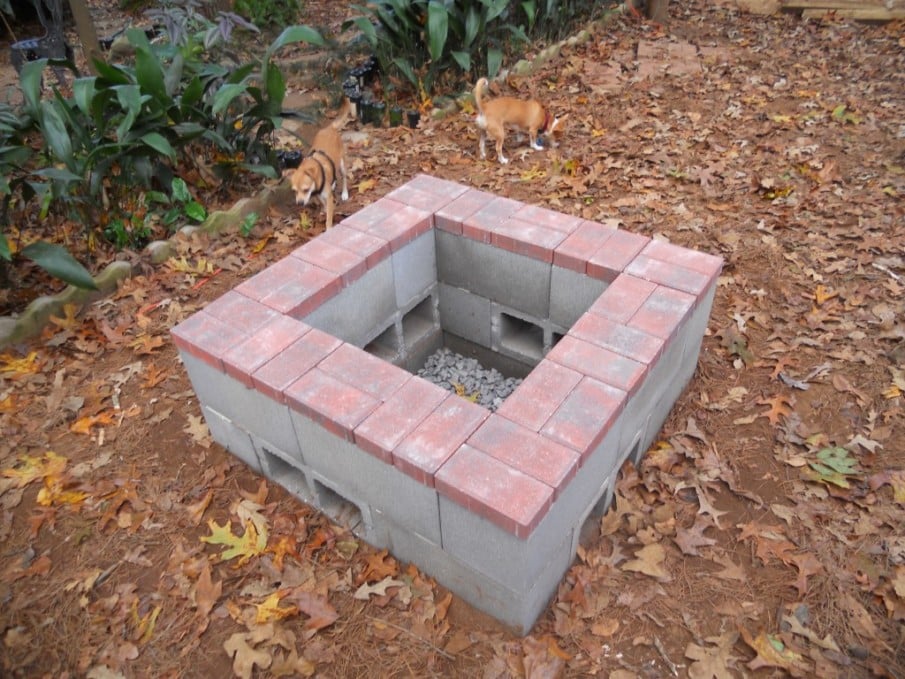 TIP: Use blocks with through holes on the bottom to enable better air intake. 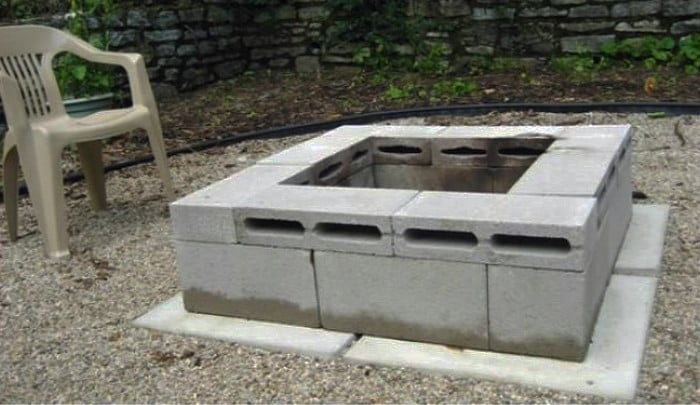 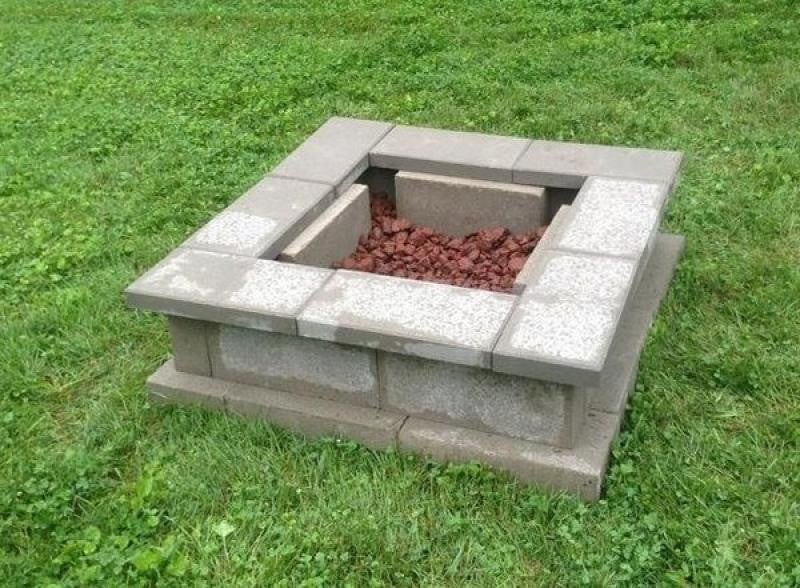 TIP: Pour some pebbles or landscape rocks on the bottom to reduce the heat effect on concrete blocks. 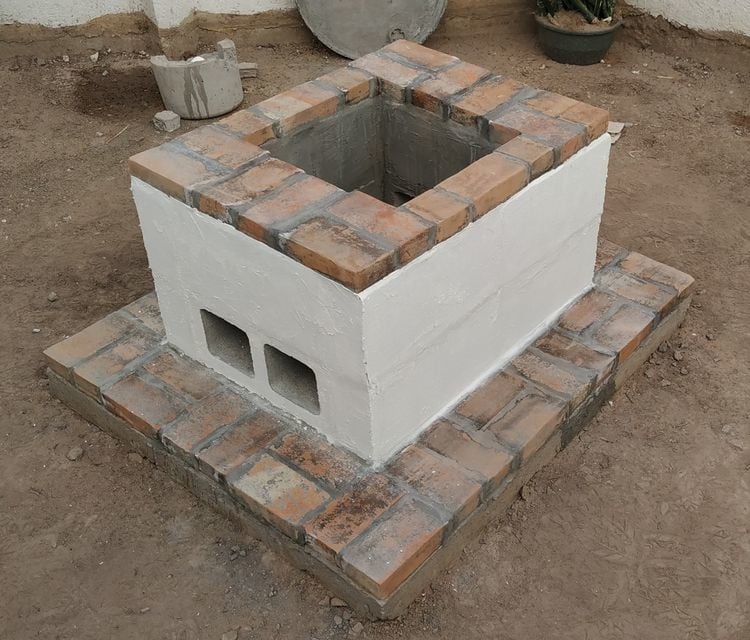 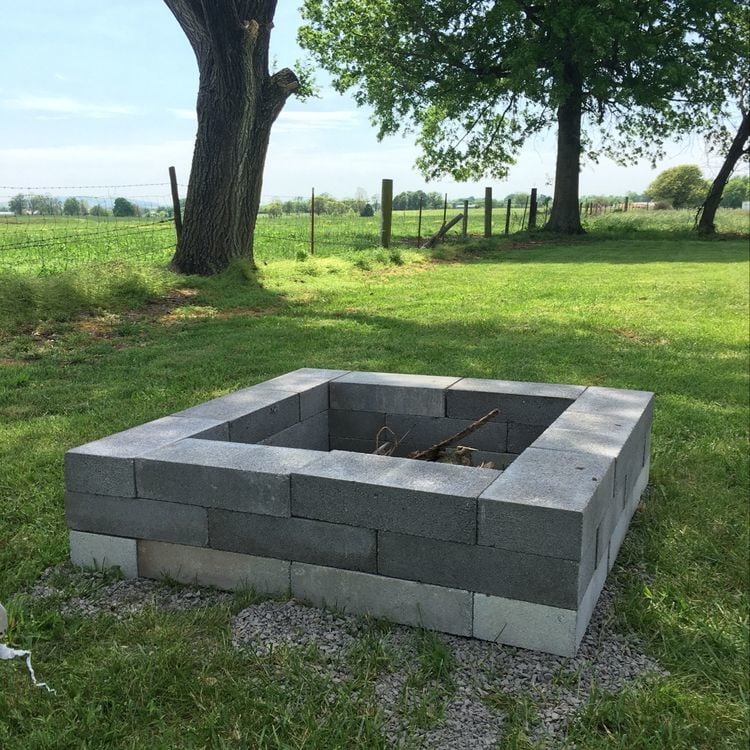 The above plan is built entirely from concrete block caps. To me, it’s the nicest design I’ve seen so far – a quick and simple assembly from uniform bricks. Use some gravel to level the surface, lay out the caps and you’re done. Caps cost a few cents more than blocks. We’re talking only a couple of dollars difference here.

TIP: overlapped blocks will hold stronger and have more appeal (see image above). 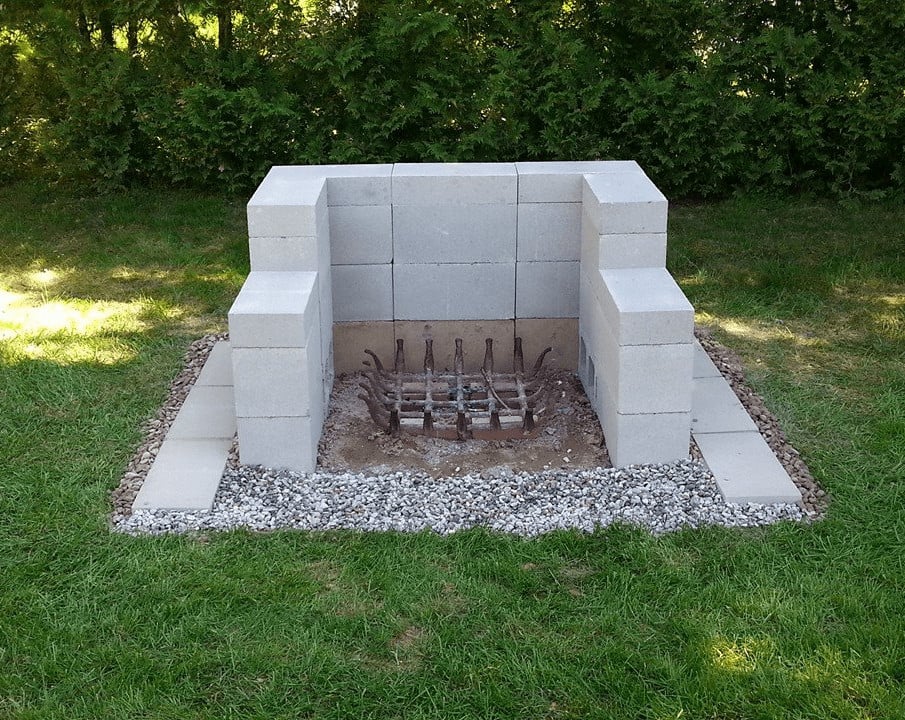 A simple and cheap idea for a very cozy fire. 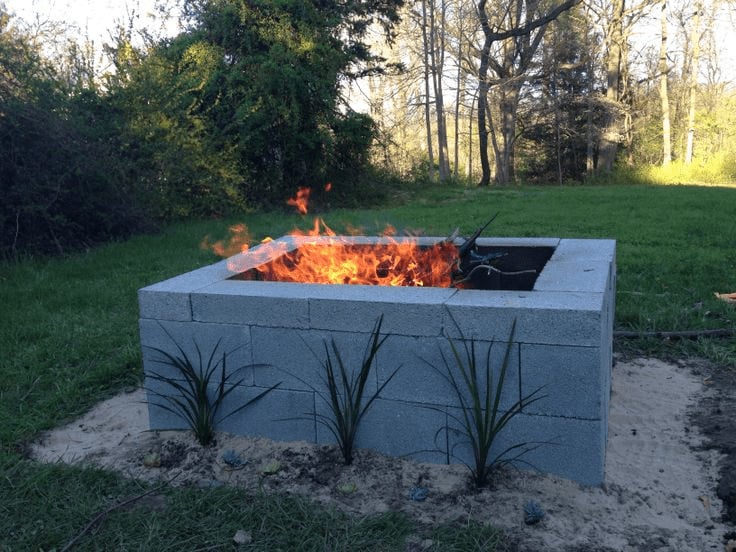 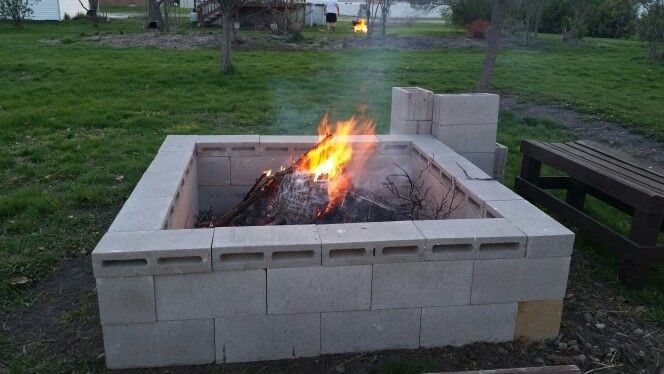 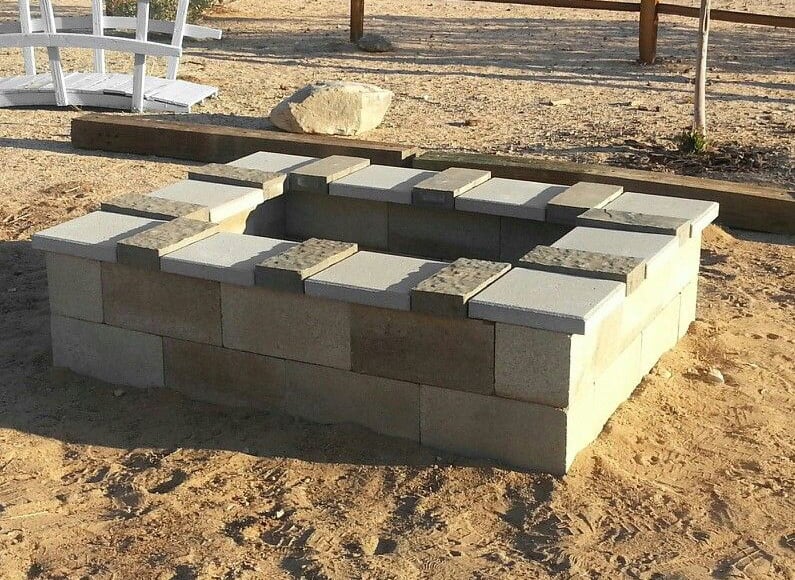 A decorative idea (image above). 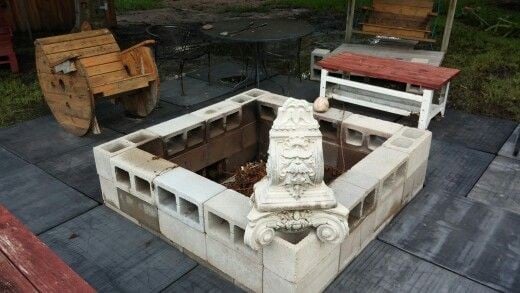 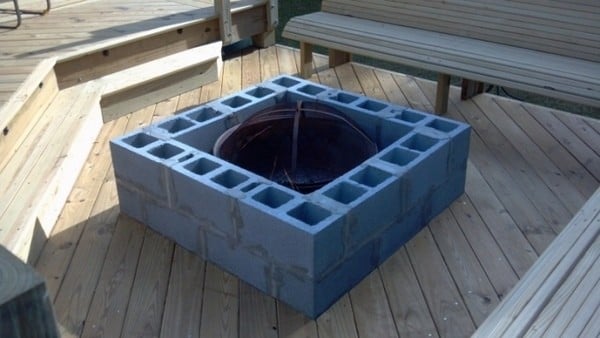 You can even install it on a wooden deck. Hmm … who would have thought? I would make the bottom from blocks too, to be safer. 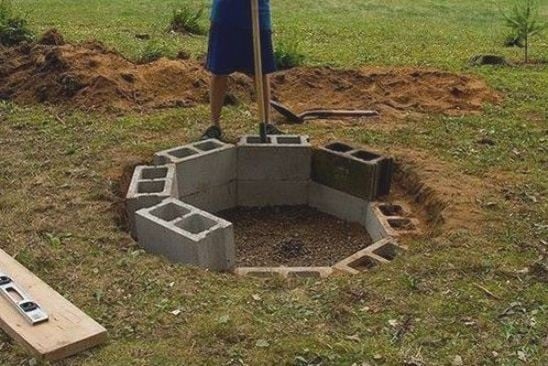 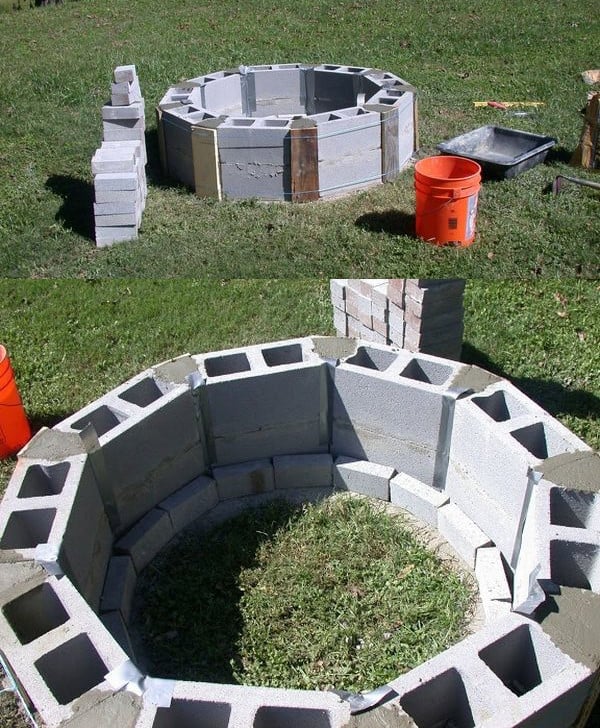 This round pit plan takes some labor and needs some cement to hold it together. The photo above shows just enough detail to understand how it’s built. Pretty clever actually. I like how they used metal wire and wood planks to keep the raw concrete from falling off. 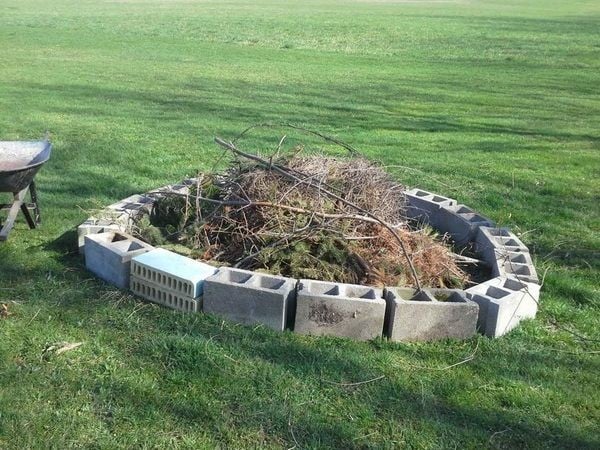 If you’re lazy and have blocks laying around, then this could be the quickest fire pit to put together. 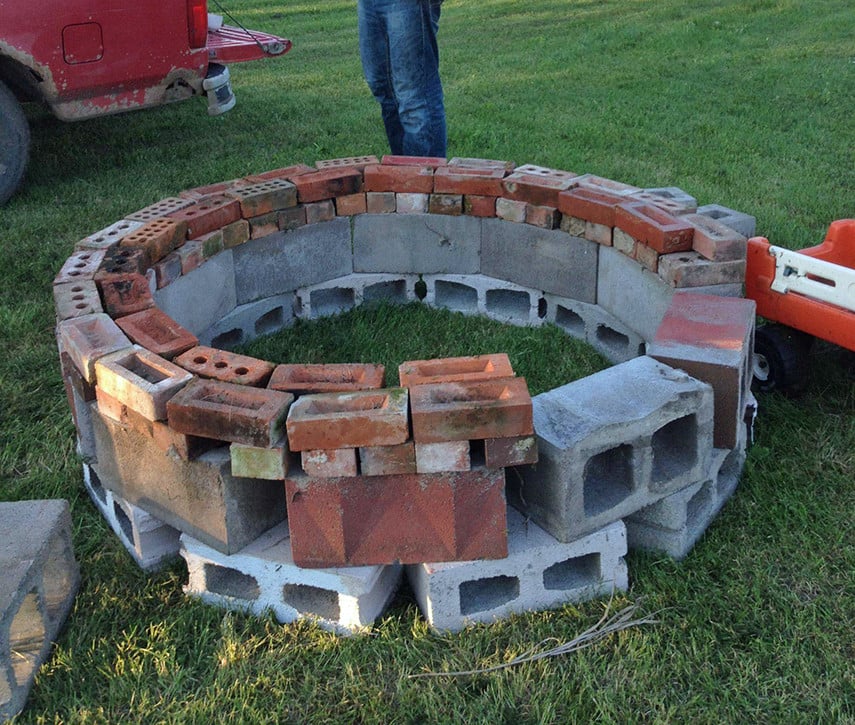 About Joe Hats 130 Articles
Joe Hats is the founder of FreshPatio.com. Joe has been remodeling homes since 1997 when he bought his first fixer-upper. He has built many pieces of indoor and outdoor furniture with his own hands and has every DIY woodworking tool in his possession. Coming from an engineering background, he has designed and built many patio fixture plans. Following his wife's lead, he is also very passionate about home decor and together they keep track of the latest trends. When he is not remodeling or trying a new woodworking tool, he is busy gardening or designing a new outdoor plan.